As we at BioPac'r, continue to look at new biomass to ensile, we will try to offer some guidance on how you can prepare these alternative biomass for packaging and ensiling.  Some of the alternative biomass to grass clippings has been, golf course green clippings,  bermudagrass scalping debrie from Phoenix area golf courses, tree leaves from the fall leaf drop period in Idaho, fruit and vegetable byproducts from Denver like their pulp, peels, roots and tops, wet brewers grain from micro breweries in Wyoming, fresh Palm Fronds in California, and the subject of this blog, verticutting debris from a golf courses fairway.

This last fall, 3-Creek Ranch and Golf Resort, Superintendent Dan Tolson called us and asked if the "nice verticutting" debris they had started pulling up from fairways the day before, could be compacted, packaged with the BioPac'r and ensiled?  They purchased one of the first BioPac'r units sold and have been packaging and we have brokered silage for them over the last 3 years.  I drove out to the golf course to find 4 tons of nice looking clippings in a roll out and piled on the parking lot and this was just off the first fairway!

Roll Out with 3 tons of Verticuttings from a single Par 4 fairway at 3 Creek Ranch & Golf Resort in Jackson Hole, Wyoming.  Teton County Wyoming transfer station charges $90/ton to dispose of grass clippings and the National average to landfill grass waste is $64/ton and the high is $134/ton.

For the next few hours I loaded the BioPac'r to its capacity.  I wanted to know if this material would make quality silage that could be fed to cattle, sheep or goats. If so, there was literally tons and tons of biomass that would be generated in just a few days.  By the end of the week, the golf crew had taken over the packaging!

University of Wyoming Extension Agent and UW Sustainability Educator, Hudson Hill, stopped by to inspect the clippings and he thought "it would make real nice silage"!  So much, he took a couple 2000 lb. bags to his own cattle to feed it out during this winter.

One of the earliest observations we made was the cuttings that were already 30 hours old since being pulled, were fairly dry with very little Moisture Content (MC). They were dry enough that there was very little heat being generated which in hindsight, turned out to be a good thing.  When it comes to freshly harvested grass clippings with high MC, (70% 87% moisture content),ambient air temperatures as dictated by geographical location (6500' in Jackson Hole, Wy. Vs. Sea level in Huston, Tx.) greatly influence these biological processes. Fresh clippings start to heat up and decompose after 12 hours but the dry biomass was delayed for at least 24 hours.

As the fairways were cut the debris was very wet and very dirty so the maintenance crew allowed it to dry out for a few hours and then drug the fairways with a harrow to knock off as much grit as possible, but this practice caused the biomass to drop below the 50% moisture level which just isn't enough moisture to facilitate the ensiling process.  We had the idea of adding water to the bags after we had packaged the cuttings to increase the moisture content raising the level to our desired 65% moisture range.

The next step was then to determine the moisture content and to do this, I took a large handful and stuffed it into a paper bag and weighed it, 446 grams wet.   Next, I placed the paper bag in my kitchen oven and set the temperature to 140°F for roughly 12 hours.  I weighed the dry sample twice, two hours apart to make sure it was 100% dry,  the dry weight was 360 grams.  Using the formula below we found the all the samples from all the verticutting we packaged to be in this 23.6% moisture range.

One sample that was 2 hours old was 61% MC and another sample that was packaged after 24 hours was 38% MC.  The filled bags ranged in weight from 900 - 1200 lbs which meant we needed to add water to each bag of verticutting clippings to bring the moisture content up from 23.6% to 65% before we sealed the bags.  So we added 90 to 110 gallons of water to each bag to bring the MC up to 65%.  As we went forward on the next bags we just started adding about 10 gallons of water every time we filled the chamber and cycled the compression stroke to get to the 100 gallon mark.  Time will tell if we guessed right or not by the quality of silage we produce.

So we were able to estimate that 18 fairways might be able to produce 70 tons of silage, worth as much as $7000, but we will address this further after we have a chance to calculate an accurate square footage using GIS.

In late October one of the farmers that we broker silage to, came by and picked up two more goose neck trailers of feed from 3 Creek Golf.  They are a grass fed beef producer, selling locally raised beef to the Teton Valley and because of this low cost high value feed, they can't wait to increase their herd size in the very near future. 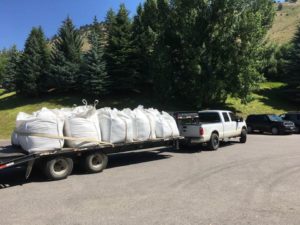 In December of 2018 we will be testing all the bags of silage made from verticuttings and also tree leaves (another blog) and will be reporting the findings in a follow-up blog to this article, so keep checking back or  "Subscribe to our Blog via Email" over in the right hand sidebar and every time we publish a new article, it will be sent directly to your email inbox.... that's Pretty Neat!