Have Your Grass and Feed it Too?

Over the last few years I've been watching California disassemble their turfgrass industry and it could be coming to your state soon.  What's happening on the west coast better alarm all turfgrass managers across the nation along with parents of small children and golfers alike.  In this century, water will become the most fought over natural resource as the worlds populations continue to increase.  Irrigation water becomes the weakest link in out argument to exist, unless turfgrass becomes more important than just a surface to recreate on.

Did you know that NASA surveyed the United States by satellite to discover that golf courses, lawns and parks cover 35,000,000 million acres of land area, surpassing even irrigated corn, turfgrass is the #1 irrigated crop in the USA? What does this mean for turfgrass managers and lawn owners in general, is there an opportunity presenting itself?  Is eliminating turf grass an answer or just a knee jerk reaction?  Once the cooling effect of turfgrass in the urban areas is gone, electric rates will go up because air conditioners will be running nonstop...hence Phoenix!  The only GREEN solution is to look at the big picture.

Drought has forced Governor Jerry Brown (D),  to make some extreme environmental decisions but I'm afraid that in the words of my Political Science professor, Dr. Foo, would suggest the the state didn't look at both sides of the coin before offering their recommendation to the Governor.  As a result, CNN reported that the Metropolitan Water District of Southern California (MWD) is paying lawn owners to rip out their lawns and Xeriscape in response.   In 2015, MWD paid out in excess of 800 million dollars ($450 million budgeted + $350 additional) with no end in sight in 2016.  "The program is projected to save more than 70 million gallons of water over 10 years -- enough water for 160,000 households, MWD says."  But homeowners must first buy into this theory.  How else can turf managers save 70 million gallons a year?  I have a great solution that doesn't require the removal of the lawns or the American Dream, and it will reclaim 100's of millions of gallons of irrigation water over the same 10 year period. read on....

Ron Hall, Editor of Turf Magazine in an article titled " We Can Conserve Water Without Ungrassing?"  says, "Obviously, there is a lot of work remaining  by both the green and water industries working closer to save lawns in California and in other water-stressed regions of the country.  But in the end the decision of whether or not to save their lawns by conserving water will rely upon property owners’ buy-in and cooperation. It’s their decision to make. Let’s help them make the smart decision".  I contend, how could Californians make the right decision to rip or not to rip, if they are not allowed to look at both sides of the coin?

What MWD didn't budget for is the increase of fossil fuels required to cool its homes as radiant heat increases, and electricity demand  inevitability doubles.  The LA Times stated that in Orange County, 61% of [residents] have some kind of air conditioning.  What happens after the other 39% get an AC unit because southern California neighborhoods no longer have lawns?  California is taking on these extreme decisions because of drought.  But as populations increase, the amount of irrigation water allocated to lawns, parks and golf courses will decrease.  In other words, one day the value of recreation will not exceed the value of available water.  In the eastern USA, you will also see water restrictions making your lawns a dirt playground.

The turfgrass industry must Reinvent itself, if we as a nation want to have lawns, parks and even golf courses in the future.

The time will come when the value of water outweighs the value of recreation.  Unless we redefine the purpose of turfgrass we will not have a dog in that fight.  Our American lifestyle not to mention the "American Dream" has at it centerpiece a green lawn, where our kids and our 1.2 pets play behind the protection of a white picket fence.

Almost every kids first job, was mowing a lawn.  Most of our current lawn care owners started mowing and turned this job into a lifetime passion.  When  economic times get tough, even non horticultural adults, looking to make ends meet, go into the mowing service for a year or two until a new career is found.  I will make the argument that lawns are important to our national economic security.  If we reduce the amount of lawns, we reduce opportunity.

Throwing the Baby out with the Bathwater

As radiant heat swallows up communities in the east, if this movement is allowed to move forward from California cooling bills will logically increase, putting even more stress on the power grid.  Residents that pay less than $1000/mo rent in Southern California most likely don't have air conditioning because my daughter lives there and she pays way for than a Grand and still doesn't have AC.  As the ambient temps increase due to Xeriscape and the radiant heat persists longer into the evening hours, AC sales will increase, (along with tempers) which require additional electricity to power fans and AC units, antidepressants because it too hot to go outside  and extra deodorant.

I would like to unveil a new idea where livestock owners that use lawn clipping silage, can save on drinking water since cattle that eat wet feed like silage, demand less drinking water.  These dairies, farmers and ranchers could then sell their unused water allotments back to local municipalities to be distributed back to residents to water their , I mean... "CROP".

Remember that in California, MWD will save 70 million gallons over ten years by ripping out lawns?  We have a way to reclaim maybe 50-250 Billion gallons annually across the nation.  It's all in how you want to look at the situation,  as an illustration, the water reclaimed in this amount of silage would be enough "live" water to build five new Hoover Dams with five (5) new Lake Mead's' of stored water behind them.........Damn!

Turfgrass will no longer be mulched or discarded into landfills, it will all be mowed, bagged and packaged as silage.  Lawns, golf courses and parks should be managed as an agricultural crop, to be harvested, packaged and fed to livestock as wet feed we have coined Lawn Clipping Silage and Grass Clipping Silage, aligning the landscape industry with the agricultural industry.

Overnight, turfgrass becomes more relevant,  turfgrass is not longer only a surface for recreation, rather turfgrass become a new crop to help feed the 100 million head of cattle on feed in the USA, while at the same time, reclaiming billion upon billions of gallons of irrigation water.

What Can You Do?

Landscapers need to educate their clients and residents must inform their elected officials that there is a new technology called BioPac'r that turns "Grass2Cash".   Technology that benefits the power grid, rural farmers, landscapers, landfills, water districts, children on the playgrounds, golfers and the price we pay at the supermarket for dairy and meat products. 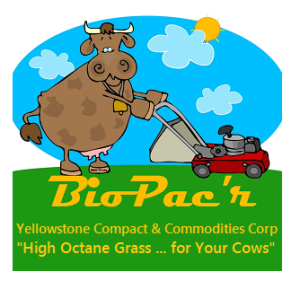 ustry and the Green industry must reinvent itself before California's plan to save on irrigation water becomes main stream and sweeps across the nation.  The media must likewise pickup on this concept.  Like Taxes, once the grass is removed there no going back!  We must become more relevant as an industry and we need to do it quickly.  We need to start viewing turfgrass as an agricultural crop to be fed to livestock.  In doing so we will be creating a new revenue stream for landscapers by selling  lawn clipping silage to your local farmers, saving them livestock drinking water while effectively reclaiming irrigation water.  This is also a RISK management technique where farmers that feed a percentage of Grass Clipping Silage in their rations are no longer as subject to the fluctuating hay markets during times of drought.  Grass Clipping Silage will contribute to working toward the goal of  doubling our food production by 2050, without the addition of more genetically modified crops or pesticide resistant crops (GMO's).   All the cropland we need to reach this goal has already been planted and the crop has been under our feet all this time.

It may be easier for a mowing company to mulch, grass-cycle or leave lay the clippings but 100% of the irrigation water that was residing in those grass blades evaporates and no longer serves anyone.  The technology is now out there and we can't turn our backs on this new paradigm shift of gardening principles, water conservation and livestock feeding.

Turf mowing manufacturers will need to adopt and reinvent mowers with grass catchers to serve this new emerging market.  Landscapers (lawn harvesters) will be able to package their clippings with the BioPac'r allowing farmers and ranchers to feed this wet feed, that after ensiling inside the package, has a shelf life of 5+ years.  Composting has lost its luster, ripping out lawns is a panic approach, but lawns viewed as an agricultural crop can become the strongest link  that can ensure the sustainability and survivability of the turfgrass industry in the future.