A while back ago, on a Tuesday morning, Tree leaves nearly killed a crew of city workers!  I drove by these maintenance workers raking leaves from a large lawn area at the High School and saw an opportunity to demo the BioPac'r.  I noticed they were dumping their plastic garbage cans into the back of a pickup so I stopped and asked them if I could loan them a BioPac'r to reduce trips to their burn pile on the other side of the school for the day.

The lead man laughed at me when he saw the inside of the Pac'r.  a 3' x 4' x 5' compartment to which he said, "we'll have that thing filled up in a few minutes".

The day before these five men raked up 21,551 square feet of lawn and it took 47 man hours or 5 men, 8 hours on Monday and 1.5 hours each man on Tuesday morning to create the pile of leaves in front of the pallets below.

I arrived with a BioPac'r at 9:30 am.  As the men began to bring their cans to us we dumped them into the Pac'r and compressed the leaves as the compartment filled up.  The first 12 cans of leaves deposited into the BioPac'r compressed into a 1" flake!  This caught all their attentions!  After 45 minutes the workers were becoming visibly tired.  At which point I asked if this was a valuable tool for them to have, meaning the BioPac'r, to which the lead man replied that they would have dumped their pickup 5-6 times in the same amount of time. 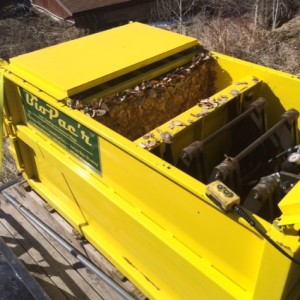 They admitted that using the BioPac'r, they were getting much more done, but also, they were plain tuckered out, because now they were not getting the short rest like they did when two men would alternate, driving pickup loads of leaves to their burn pile 2 minutes away.  The other three would continue to make piles or just wait for the truck to return.

By 11:00 am the BioPac'r was filled to capacity with a little under 2000 pounds of compacted leaves that we packaged over the noon hour.  The workers on the other hand, took a 2 hour lunch break and at 1:00pm only three returned!  Maybe I did finish off a few workers?

Let's Do The Math

Many don't rake leaves anymore and I get it, but the bottom line is that even if you mow up the leaves, reducing trips taking leaves away from your job site will pays big dividends.  When it comes to leaves, weather you are vacuuming them up, mowing them and dumping them into a pickup or trailer, there's a lot of fluff!  Several trips worth!

If you are really Interested in making money, reduce the number of trips and all that labor, get yourself a BioPac'r!