The unfortunate truth is that 35 million acres of grass clippings are still being mowed and collected and 30 million acres are thrown into the landfills every week. This is equilivant to 200 Million Round Bales of Hay!  The BioPac'r presents a way to "package and pickle" freshly mowed grass clippings for years without them rotting.  The University of Wyoming Extension Service has proven that cattle actually prefer Grass Clipping Silage to hay.

What most Americans don't know, is that the cattle born on the public lands of Wyoming are some of the same cattle that are exported to other states to be finished in feedlots, that later find themselves on kitchen tables and the 5-Star restaurants across the planet.  Wyoming is sending heifers to places like Russia (Wyoming heifers en route to Russia by Jennifer Womack) to help them build their cattle herds.  In a sense, Wyoming Agriculture is the baseline of the cattle industry worldwide and because the University of Wyoming has also recognized this, innovation flourishes in the hearts and minds of every cowboy at heart.

"Agriculture has a sentimental and societal role in Wyoming. It forms the bedrock of a lot of our communities, and it's an important part of our economy—producing the food we all like to eat while preserving open spaces," says Frank Galey, Dean of the College of Agriculture and Natural Resources, UW and "We all want to see it continue for future generations." - Excerpt from Ties to the Land by Chad Baldwin

As a Wyoming resident I'm very proud of the interest that the University of Wyoming folks have taken in this "Out of the Box" concept of an alternative silage product that can be produced by users of the BioPac'r across the nation, using the native grasses found in the different regions of the United States.  In the mountain states, common bluegrass grows throughout the range.  There's no doubt that when you hear of grass fed livestock, somewhere along the line these cattle were grazing on common bluegrass.  Isn't it exciting that 30 million acres of grass clippings are produced by homeowners across America that can now be safely feed to cattle.  The University of Wyoming sees the value in pioneering and dispelling fears when it comes to capitalizing on the 35 million tons being wasted each week by using this natural resource for livestock feed.

How many Cows can US Grass Clipping Feed? 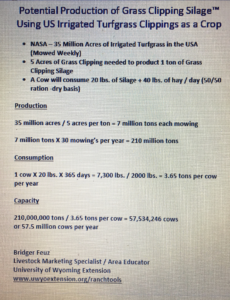 University of Wyoming Extension Agent and Sustainability Educator said, it's " Interesting to think about the potential to feed half of the cows in the country? ".

So, the first step to smoothing out the bumps in this road was how to keep fresh clippings for an extended amount of time so it can be used during the winter.  BioPac'r answered this question by giving lawn mowing people a tool (BioPac'r) that not only saves them labor costs, but also a specific patent pending process that PREVENTS fresh grass clippings from going down the age old road of composting within a few hours.  Grass Clipping Silage™ was born.

With care given to the 1 ton packages, Grass Clipping Silage can have a shelf life of up to seven (7) years and the Chinese have shown that silage itself can be kept for over 20 years.  Here's an interesting fact, once a bag of Grass Clipping Silage is opened up, we never say mold grow on the exposed face as happens with corn or alfalfa silage?  We can only attribute this to 100% complete fermentation because of the special properties the BioPac'r brings to the table by eliminating 100% of the oxygen in the first few hours of the bag being sealed up.

During the spring of 2013, the University of Wyoming Extension Agent, Hudson Hill and Bridger Fritz oversaw a Grass Clipping Silage, adaptive feeding study, using calves from a grass fed cattle operation in western Wyoming.  One pen was allowed to eat what they always eat, 100% grass hay.  The other pen received 50% grass hay and 50% Grass Clipping Silage™.  The Silage was produced with a BioPac'r by Green Turf Lawnscapes in Jackson Hole, WY during the summers of 2011 and 2012.  The cattle adapted to the new ration within hours with no side effects (scours) and they actuall preferred the Grass Clipping Silage™ over the hay over the duration of the study.  I actually saw these animals pushing the hay off the silage so they could eat it first.  This has been the case as reported by farmers and ranchers now using this new Super-Feed.